We have a chance this November to wrest control of several state legislatures back from the Republicans. And this is crucially important this year, because 2020 is a census year. That means that whoever is in charge of state legislatures following the November election will be drawing the district maps that will be in place for the next decade.

And while the Democrats have historically focused a lot of their organizing on federal elections, they’ve been investing much more heavily in the states. It’s been awesome to see headlines such as:  Democrats plan $50M campaign to flip state legislatures before redistricting

Preventing Republicans from gerrymandering all of these states again would be amazing. But even more than that, just taking a quick look at what the Virginia state legislature has been accomplishing since flipping both their state House and Senate this past fall will inspire you: 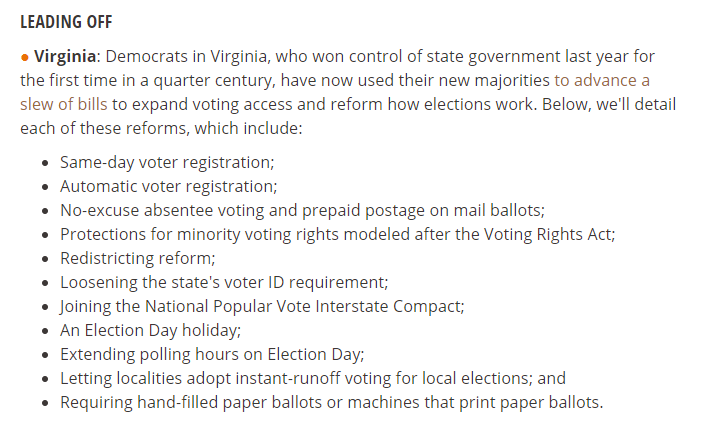 Just imagine all of these states having the opportunity to advance legislation to protect democracy, improve benefits for its citizens, and so much more!

Now, here are the 11 state legislative chambers that are really competitive this year, and that need our attention:

ARIZONA, House & Senate – Each chamber is within 2-3 flips of switching to a Democratic majority. Flipping a chamber would also mean ending the current Republican trifecta in the state (meaning they have control of the governorship and both state legislative chambers.)

FLORIDA, Senate – The Democrats are within 3 flips of breaking the Republicans’ majority in the Senate, and doing so would break the Republican trifecta in the state.

IOWA, House – The Republicans currently have a trifecta but we could break that by flipping 4 seats in the state House. In 2018 we decreased the Republican majority to put us in strong contention for this flip.

MICHIGAN, House – In 2018, we decreased the Republican majority to put us within 4 flips of taking majority control of the House.

MINNESOTA, Senate – Back in 2016, the Republicans flipped the Senate. But in 2020, it’s our opportunity to flip it back to the Democrats with just 2 flips. Also, if we flip their Senate, Democrats will have a trifecta.

NORTH CAROLINA, House & Senate – In 2018, the Democrats broke the Republicans’ supermajority in both chambers, and in 2020, we have the opportunity to take control of both chambers. We’re within 4-6 flips of that reality.

PENNSYLVANIA, House & Senate – The Democrats have been chipping away at the Republican majority and are in striking distance of flipping the House and the Senate.

TEXAS, House – There is a massive effort to flip the Texas House; even Beto O’Rourke is pitching in to make this flip a reality. It’ll be competitive, but it is possible – Cook Political Report has rated this as only “Lean Republican.”

If you live in one of these states, you should get involved with your local Democratic party and Democratic-leaning local organizations. If you’re outside of these states, you could help out by supporting or getting involved with the following groups that are highly focused on organizing in the states. At the very least, I encourage you to sign up for updates so you know what they’re working on, and what kind of help they need: