Chief Justice John Roberts administers the impeachment trial oath to all of the U.S. Senators. Photo via CNN.

The impeachment trial of President Trump is now underway. For only the third time in our country’s history, a president has been impeached and now the U.S. Senate must conduct a trial to determine what happens next.

First, Rep. Adam Schiff, as the lead House manager, read out the two articles of impeachment to the full Senate. Then, Chief Justice John Roberts was sworn in.

He will then swear in all 100 senators, where they will take an oath to do “impartial justice” https://t.co/GDbOXJD7Y0 pic.twitter.com/XahM34UWhc

Once he was sworn in, the Chief Justice read out the oath that all of the Senators must take prior to the start of the trial. It is an oath they take on top of the oath they take when they assume office. This is the text of the impeachment oath: 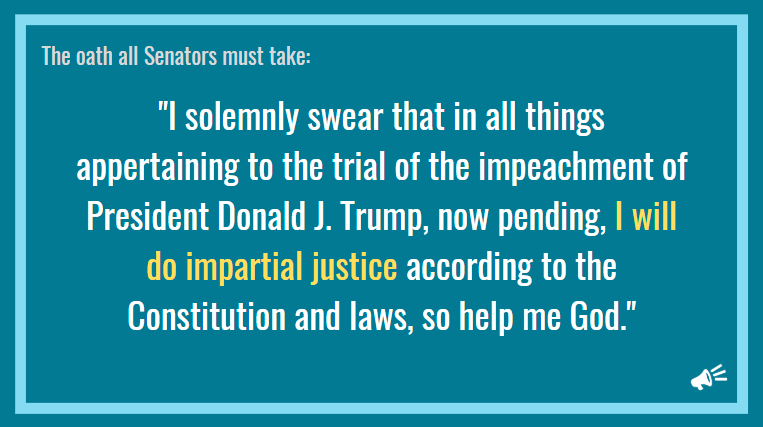 After verbally assenting to the oath, all of the Senators signed their names in the oath book, so there is a written record.

WATCH: Timelapse shows all Senators in attendance signing the Senate oath book, after being sworn in by Chief Justice John Roberts for the impeachment trial of Pres. Trump. https://t.co/VzqoLhOsfn pic.twitter.com/JXiYp8Q4Th

Today, Chief Justice Roberts administered a specific oath of office to every Senator for the #ImpeachmentTrial.

Problem is, we’ve already had multiple Senators make it clear that they intend to violate that oath. Follow along as I name names: //Thread pic.twitter.com/J0kPrId6kT

I’m glad the trial is starting and I hope Americans will tune in. The trial will have a very different feel to the House proceedings, mostly as the rules governing the trial are so different from conducting hearings. Be sure to read this quick guide so you know what to expect next week:  How Will the Senate Impeachment Trial Work? Your Questions Answered.