Home › Explainers › Trump wants to shut down protests: What you can do right now

Trump wants to shut down protests: What you can do right now 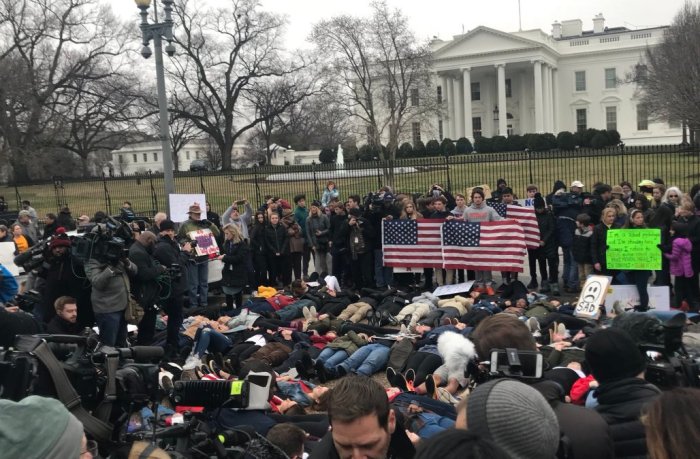 Protest at the White House in February 2018. Photo by Zach Gibson/Getty Images

TRUMP DOESN’T LIKE PROTESTS OUTSIDE THE WHITE HOUSE, SO HE’S TRYING TO IMPEDE OUR RIGHT TO PEACEABLY ASSEMBLE. THERE ARE 4 DAYS LEFT TO COMMENT. DO IT HERE. WHILE YOU STILL CAN.

There are new regulations being proposed through the National Park Service to seriously curtail the ability of Americans to peaceably assemble and protest their own government, directly adjacent to the White House and throughout the Washington, DC area.

Does this surprise anybody? Of course not. Should we stand for it just because it’s not surprising? ABSOLUTELY NOT.

This is an affront to our right to freely assemble, enshrined in the 1st Amendment to the Constitution of the United States:

Congress shall make no law respecting an establishment of religion, or prohibiting the free exercise thereof; or abridging the freedom of speech, or of the press; or the right of the people peaceably to assemble, and to petition the Government for a redress of grievances.

As the ACLU notes, these new regulations “would violate court orders that have stood for decades.” The new restrictions would close off 80 percent of the sidewalks surrounding the White House, and limit the ability of the American public to mount spontaneous protests (which may come in handy as the walls close in around Trump regarding new revelations from the Russia investigation). Also in the works: increased fees for protesting that, the ACLU says, “could make mass protests like Martin Luther King Jr.’s historic 1963 March on Washington and its ‘I have a dream’ speech too expensive to happen.”

We have until Monday, October 15th at 11:59PM EDT to leave comments about these new regulations at the regulations.gov website. As of the publishing of this article, there are 7,623 comments on the site. Can we triple that before the deadline?

These comments matter. When regulations are challenged in court, judges often look to public sentiment as an important source of information for a final ruling. So, this is a critical way to engage in your democracy.

Your task: >>CLICK HERE<< to leave a comment before the deadline. Then ensure that three friends do as well.

HERE ARE SOME SAMPLE POINTS YOU COULD ADAPT/MODIFY IN YOUR OWN COMMENT:

I strongly oppose these new regulations proposed by the National Park Service for the following reasons:

These newly proposed regulations must not be allowed to go into effect. If they do, we the people will challenge them immediately and fiercely in court and I will support these efforts.

Reference: Text from the proposed regulations, pertaining to protests adjacent to the White House.

(D) Public access is not allowed on the south sidewalk of Pennsylvania Avenue NW, adjacent to the North Fence Line of the White House Complex, from the security post located just north of West Executive Avenue NW to the security post located just north of East Executive Avenue NW. The area of sidewalk to be closed shall consist of a twenty (20′) foot portion of the sidewalk, extending out from the North Fence Line, leaving a five (5′) foot portion of the sidewalk for pedestrian access.

(E) The closures described in paragraphs (g)(3)(i)(A)-(D) of this section are identified in the following map and as further delineated with fencing in the park areas themselves. Exceptions for the pedestrian walkway at First Division Memorial Park and the center monument area and pedestrian walkway at William T. Sherman Monument and Park are not displayed in the map because they are subject to closure at any time for protective measures or special events.

Reprinted with permission from DemWritePress